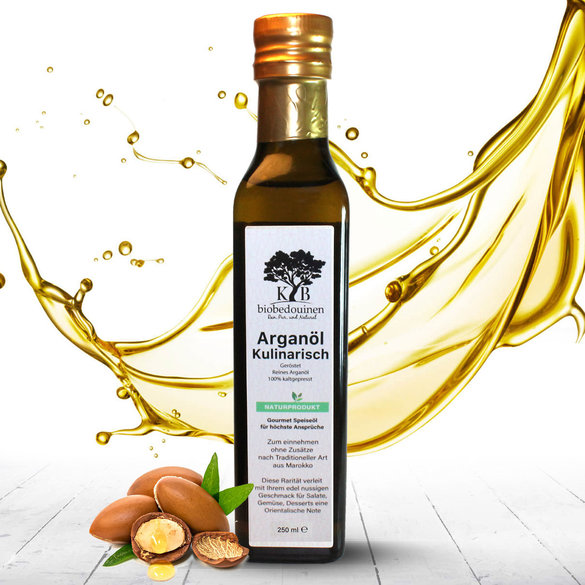 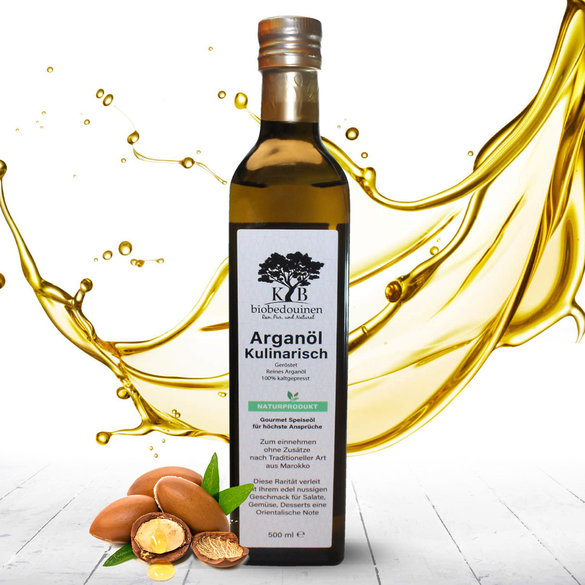 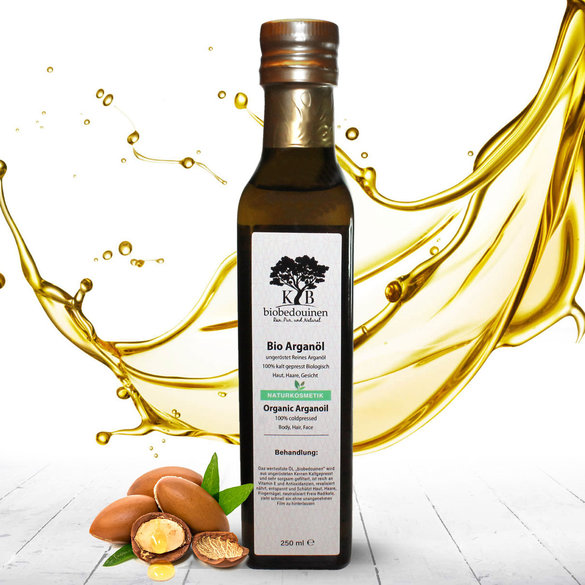 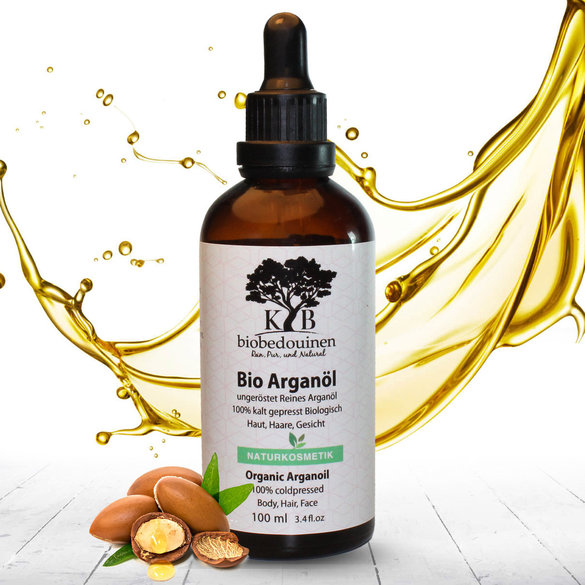 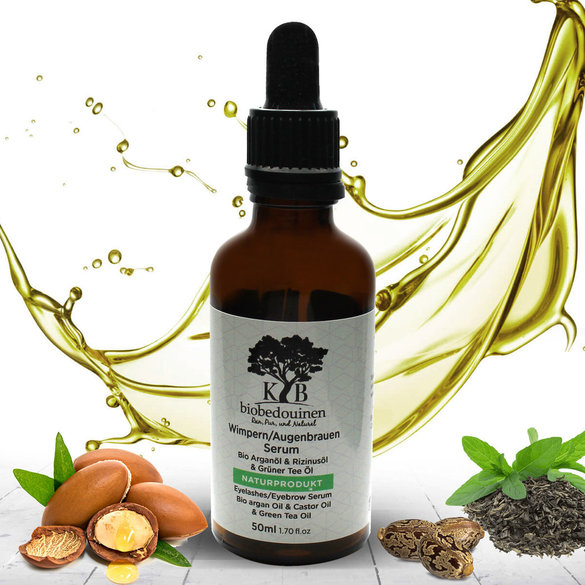 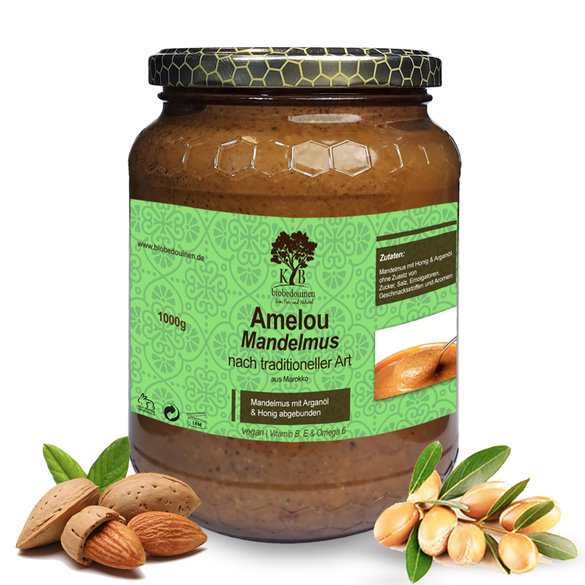 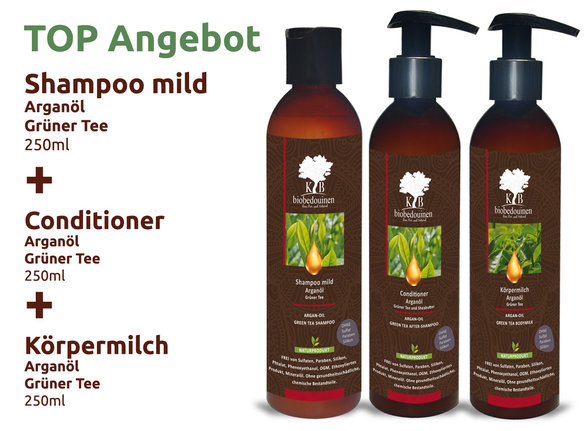 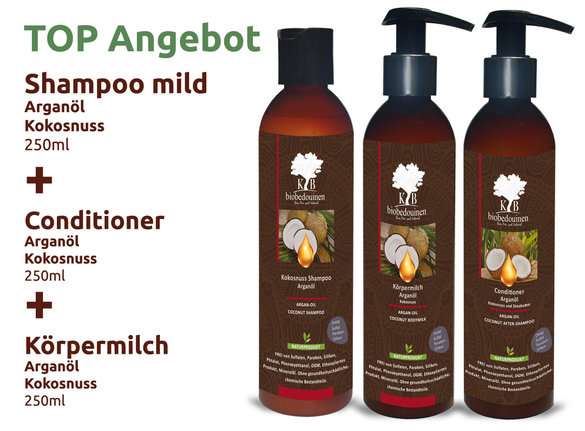 It is one of the most valuable vegetable oils on earth. It is also known as liquid gold from Morocco and is now very popular. Argan oil is said to have numerous positive properties. Due to the high vitamin E content and the optimal combination of essential fatty acids and antioxidants, it is used in a wide variety of areas. Among other things, it is used in the areas listed:

The origin of argan oil is unique in the world.

As mentioned, the argan tree only thrives in one region - in southwest Morocco near and around Agadir. From a botanical point of view, the argan tree is a relic from a bygone geological age, the Tertiary. It is valuable for a variety of reasons, and its maintenance and care is a matter of state. Its current distribution area, the "Arganeraie", is about 8000 square kilometers. Since 1998 UNESCO has designated it as a biosphere reserve. This ensures that the trees can be used in the traditional way and secure a livelihood for around two million people, while being protected as much as possible.

Its economic and ecological importance for the Amazigh, the Berbers who live here, is immense. They initially produce argan oil for their own use, because it is a traditional part of their kitchen and as a domestic “medicine”, but it is also used for skin care. The targeted production for the sale brings hard cash and is an economic mainstay for an otherwise very poor population.

The yield from the extraction of the argan oil is extremely meager in relation to the expenditure: around 30 kilograms of fruit - which are not harvested from the tree, but fall off and collected in ripe form - contain enough seeds to produce just under a liter of the precious oil.

In the kitchen, oil from roasted nuts is mainly used because of its taste. It goes well with salads, but also with hot dishes. It should be noted that it makes most sense to add the oil to the finished food at the end. Of course you can also fry with it, but unfortunately the valuable active ingredients that make argan oil so unique are usually lost. The native oil can also be used in the same way. The difference lies in the taste, which is much milder here, and in the fact that you can be sure that none of the active ingredients can be lost through roasting. A note on our own behalf: The argan oil from biobedouinen is roasted so gently at temperatures below 40 degrees Celsius that the powers of the oil are largely retained. In cosmetics, the pure oil can first be used, which is applied directly to the skin. As a rule, native argan oil is used for cosmetic purposes. This is mainly due to the fact that it is almost odorless compared to the oil made from roasted nuts. It can be used on the face as well as on the entire body (may also be a question of cost ...) In addition to pure oil, there are now a large number of cosmetic products based on or with argan oil as an ingredient: creams, lotions, soaps, shampoos , etc. Here it is always advisable to check the list of ingredients: You can see roughly how much argan oil is actually in the recipe by the position in which the ingredient argan oil is listed. The further ahead, the more - the further back, the less.

Nevertheless, argan oil is a healthy and good oil that has a wide range of uses. If it is used in the cosmetic field, the kernels of the fruits from which the oil is pressed are processed untreated. The almond-like kernels are roasted for use in the kitchen, which gives them a nutty, roasted aroma.

But caution is also required here. Because there are serious differences in quality, warns Matthäus: “The problem is that the oil is often produced traditionally. As a result, microbial processes can also take place and the stability of the oil is not particularly good. Many of the oils we examined had a very unpleasant taste. That was in the direction of Roquefort cheese. " With some dishes this is still easy to imagine. “But it's also going in the direction of scruffy, musty and prickly. These are actually degradation reactions due to a lack of care during manufacture. "

The consumer cannot tell from the bottle whether he is buying a high quality oil or not. The only thing that helps here is to try it out and find the tastiest oil. Because of course there are also oils of excellent quality.

Nevertheless, there are hardly any limits to the use in the kitchen with a high-quality argan oil. Nevertheless, Betrand Matthäus recommends using it for cold dishes. Salads, desserts and other delicacies can be refined with the fine nutty aroma. The oil can also be used for cooking and frying without any problems. However, the taste is lost by heating. However, this is the case with almost all cooking oils. However, since argan oil is very expensive, it can be used in cold kitchens.

Argan oil is an excellent source of vitamin E. This successfully fends off harmful free radicals at the cellular level, which means that hair and skin are kept elastic and vital. For precisely these reasons, vitamin E is often and often added to restorative shampoos and skin creams. It should even be able to significantly improve hair growth and fullness. If the argan oil is applied externally, the vitamin E can intensively support the regeneration of sun-burned and scarred skin areas.

Tocopherols are a special form of this vitamin. As antioxidants, they can neutralize skin damage caused by harmful free radicals. This is particularly important with regard to the ongoing environmental pollution. Likewise, the carotenoids in argan oil give the skin a much fresher and younger look. In addition, as natural antioxidants, they tighten the tissue, while at the same time protecting against UV rays is built up.